The Israeli premiere of Gloria Greenfield’s new film, Body and Soul – the State of the Jewish Nation, took place on October 20th in Jerusalem. Exclusive interview with the director, Gloria Greenfield. 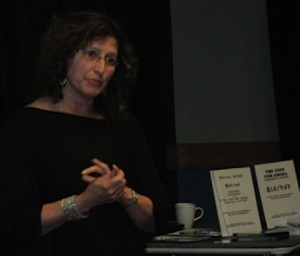 Gloria Greenfield brings over 30 years of strategic planning, marketing, and management experience to her current work dedicated to the strengthening of Jewish identity and Jewish nationhood through film. Greenfield produced The Case for Israel – Democracy’s Outpost, released by Doc Emet Productions in 2008 (and subsequently was translated into Arabic, French, German, Hebrew, Japanese, Russian, and Spanish). She produced and directed Unmasked Judeophobia (2011) and Body and Soul – The State of the Jewish Nation (2014).

Prior to founding Doc Emet Productions, where she serves as President, Gloria was a senior executive in the publishing world; senior marketing manager in the high tech industry; strategy manager for the Partnership for Excellence in Jewish Education; director of the Adult Learning Collaborative for Combined Jewish Philanthropies; and executive director of The David Project, where she broadened the organization’s mission to focus on Jewish leadership development and launched groundbreaking Israel advocacy programs for American students in Israel.

In January 1980, Gloria was featured in Ms. Magazine as a “woman to watch in the ‘80s”.  An alumnus of the State University of New York at Oswego, she was honored with their “Distinguished Alumnus Award” in October 1983; and in May 2005, the Bureau of Jewish Education of Greater Boston presented Gloria with their Keter Torah Award for her contribution to Jewish education.