We have heard and read many pronouncements from you dealing with our current water crisis, so I know that the matter is of deep concern to you, as it is to most of your constituents.

I should appreciate it if you could clarify the following: In researching South Africa’s drought and the Cape’s water crisis I discover that in the entire world there is only one country, and a desert country at that, which has not only solved its water problems but has a surplus of water. It shares its success with all who ask for advice. It has tackled and successfully overcome the problems constantly trotted out as inhibitors in the past such as affordable filters and power supply, innovative agricultural use, recycling and more, so that today 90% of its potable water comes not from natural sources but from water recycling of polluted water, sewerage and the sea.

Why are we not talking to Israel? Israeli water technology is being used in countries world wide, including in Africa, to bring relief to their populations. It is not difficult to see that South Africa is plunging headlong into a crisis. We will live to regret that we did not at least explore ways in which Israel may help us.

We know that the process of desalination for example is not simple. But most of the filtration costs and brine problems that have bedeviled this technology in past years have been solved.

We cannot escape the fact that ours is a fast-growing population, and the need to feed it through efficient, water-dependent agriculture, let alone provide water for drinking, washing and cleaning, makes unprecedented demands on our available potable resources.

Scientists tell us that we must rely on less than 10% of what nature provides, 90% being tied up in ice and snow, but but this in a growing population has proved to be inadequate. 55% of this 10% is used for agriculture, which together with 6% used for industry, makes a staggering 61% of clean, sweet water that is not consumed by humans and animals.

Your commendable suggestions for recycling and saving water, even if fully applied, will not solve the long term and immediate problems. You made the very valid and scary point that we will run out of potable water in the Western Cape by March 2017.

There can be no doubt that a partial solution lies in desalination of seawater – an unlimited resource. In the world today there are 40 desalination plants using Israeli technology, ten in the United States, five in Israel and others scattered throughout the world including Africa.

With respect, you should tell us if you are looking at this technology for Cape Town. We have a right to know that we are not adding to the many white elephants that this city has become saddled with at great cost over the years. 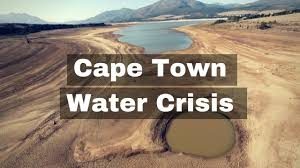