You Are Here: Home → Why BDS is Failing; Extract from Adv. Charles Abelsohn’s New Year Report 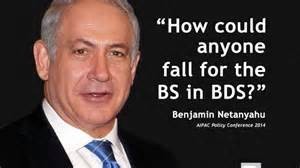 The anti-Israel boycott, divestment and sanctions (BDS) and “Israel is apartheid” movements are being rejected by the very people they incorrectly assume they are assisting. The average West Bank Palestinian looks in the direction of Israel and works there. 70,000 West Bankers work daily in Israel and the settlements, supporting over 500,000 (about 30%) of the West Bank population.

Despite the usual anti-Israel and anti-semitic currents, the Israeli people, continue to enjoy standards, opportunities and happiness that the rest of the world could never have imagined would ever be reached. The barking persists, but the Israeli caravan continues to forge ahead.

In the conflict with Hamas, Israel enjoyed the not so quiet support of Egypt and the quiet support of Saudi Arabia, Jordan and several of the Gulf States. Despite BDS and the noise of useful idiots, for the first time since 1948 Israel found itself as part of an Arab coalition.

Israel has much to be proud of. Let`s look at why this Israeli caravan is not just forging ahead but racing ahead. Using several indicators published by different entities (World Bank, Gallup), the results are informative. In the happiness stakes Israel is the number one country. The UK is in 7th place, Australia in 11th place, Canada 13th and the USA 20th.

It costs less in Israel to be happy than anywhere else in the world, and Israelis are happier with their lives than people in other Western countries. Incidentally, all the countries mentioned are richer than Israel but none are able to use their wealth to better effect than Israel.

The UN produces annually its human development index. Israel is in 16th place out of 186 countries but is in the top “very high human development” ranking. South Africa is in 121st place, and the Palestinian Authority In 110th place.

The Organisation for Economic Co-operation and Development (OECD) comprises the 34 most developed countries founded in 1961 to stimulate economic progress and world trade. It is a forum of countries committed to democracy and the market economy. Israel applied for membership of probably the world`s most exclusive “country” club in 2004 and was finally admitted in 2010.

Natural gas fields discovered off Israel’s coast since 2009 have brightened Israel’s energy security outlook. The Tamar and Leviathan fields were some of the world’s largest offshore natural gas finds this past decade. The massive Leviathan field is not due to come online until 2018, but production from Tamar provided a one percentage point boost to Israel’s GDP in 2013.

Israel recently was accepted as a permanent member into the Paris Club of creditor nations, an influential group of rich nations that help poor indebted economies, giving the country an international boost of recognition for its economic accomplishments. The Paris Club announced Israel’s induction, bringing the club’s membership to 20 countries. There are many countries significantly wealthier than Israel which do not qualify for membership.

Israel’s gross domestic product catapulted from ‎‎$30 billion in 1984 to $300 billion in 2014; per capita GDP surged from $7,000 to ‎‎$38,000; the budget deficit to ‎GDP ratio decreased from 17 percent to 3 percent; the defense budget reduced from ‎‎20 percent to 6 percent; annual inflation collapsed from 450 percent to 1 percent; the foreign ‎exchange reserves swelled from $3 billion to $89 billion; exports rose from $10 billion to ‎‎$90 billion; high tech exports expanded from $1 billion to $28 billion; research and ‎development expenditures to GDP ratio grew from 1.3 percent to 4.2 percent (almost the highest in the world) and the ‎population of Israel grew from 4.1 million to 8.2 million. The growth ‎from 1948 is even more impressive: a 2000 percent growth in GDP, from $1.5 billion to ‎$300 billion.‎

In 2014, Israel is the world’s top exporter of drones, the world’s co-leader ‎‎(along with the U.S.) in the development, manufacturing and launching of ‎small and medium sized satellites, the second-largest cyber exporter in the world — ‎‎$3 billion in 2013 and three times larger than Britain’s, as ‎well as an emerging natural gas power. Leading U.S. venture capital ‎funds have established Israel-dedicated funds, and over 250 leading U.S. high tech ‎companies established research and development centers in Israel, ‎leveraging Israel’s brainpower, which in turn has become a chief pipeline back into the USA and World economies of cutting ‎edge technologies.

The west is dependent on Israeli technology. It has been revealed that Israeli spy satellites, overflying Iraq at angles and frequencies unavailable from U.S. satellites, have provided images that allowed the Pentagon to “fill out its information and get better battle damage assessments” after strikes on Islamic State targets.

BDS is noisiest in the United Kingdom. I suggest that the BDS movement in the UK is doomed to irrelevance. As Prime Minister Cameron himself said: “We are going to keep on working with Israel, doing business with Israel, trading with Israel.”  In that address, Cameron was fulsome in his admiration for Israeli achievements.  “Israel has got more start-up businesses per head than any other country. How do they do it?  It’s about the aspiration and drive of its people. These are people who have innovated around every problem that life has thrown at them. So we want to work much more closely with Israel – on innovation, on technology.” The success of that policy is clearly apparent in the trade statistics for 2013.  Total UK-Israeli bilateral trade rose over those 12 months by 5.7 per cent, or $300 million, to stand at very nearly $5.5 billion in all.   Trading activity is weighted heavily in favour of Israel.  Israel imported some $2 billion-worth of goods from the UK, but exported some $3.5 billion-worth.  The UK is, except for the US, Israel’s largest export market.

It is UK demand for Israeli medicines that helped take bilateral trade to its record high, as British patients benefited from Israeli pharmaceutical advances, including drugs for Parkinson’s disease, such as Azilect, developed by Technion scientists, and generic versions of drugs produced by Teva. I repeat: trade in all products usually exported by Israel to the UK increased.

Also not involved in BDS is the Arab World. Freighters carry trucks to the Israeli port of Haifa, bringing goods from Europe to customers in Jordan and beyond. These goods are then carried from Jordan into Iraq and Saudi Arabia.  Until three years ago these trucks would have come through Syria, but the civil war has made that journey too perilous. The number of trucks crossing between Israel and Jordan has jumped some 300% since 2011, to nearly 11,000 a year. Transit containers shipped to Israel for passage on to other Arab countries increased to nearly 80,000 tons in 2013 from about 20,000 tons in 2010.  Israel is returning to its historic role, as a transit country, as a bridge between continents, where historic trade routes passed through.

Is time working for or against Israel? The economic indicators from ‎‎1948 until today confirm that Israel has experienced ongoing continuous splendid and unprecedented economic growth, in defiance of ongoing ‎war, terrorism, boycotts and international pressure.‎ Don`t bet against Israel.

The number one investor, Warren Buffett had this to say: “Israel is the leading, largest and most promising investment ‎hub outside the United States. I’m not Jewish, but Israel reminds me of the United States after its birth. The determination, motivation, intelligence and initiative of its people are remarkable and extraordinary. I’m a big believer in Israel’s economy. I didn’t invest the money in any other country. That’s the strongest vote of confidence I can give you.”

Charles Abelsohn, a co-founder of Truth be Told, retired several years ago as the legal manager of one of the most well–known entities in Israel. He is a graduate of three universities (Cape Town, Stellenbosch and U. of South Africa) in Law, Transportation Economics and Finance. His interests, even as a young student, were Judaism, Israel, Economics and Finance.