You Are Here: Home → His Majesty King Goodwill Zwelithini addresses ANC top six and emphasizes the importance of the SA / Israel relationship

In his speech, he spoke at length on the importance of South Africa’s relationship with Israel.

Below is a translated excerpt from his address:

… Mr. President, there are things that I don’t like talking about much, which is to interfere in things we know nothing about. I am pleading that we should not find ourselves involved in wars that we know nothing of, because we will find that the people that we involve ourselves with, in their wars, are the same people that work in ways that can help us with our drought issues, which we are still facing and hasn’t ended because our dams are still not full. They can change that and make our dams our source of life.

As is now in Cape Town, did you see that it didn’t have many visitors over the holidays? What is the cause of that? There are countries that are skilled, that can make the sea water to be the life in our country. So I plead with you, to please focus more on the issue of drought, because we hope to see the economy increase, and we would really appreciate it.”

The South African Zionist Federation and South African Friends of Israel, partnered with His Majesty in the building of the two clinics referred to. One is located in Mathubathuba and one in Emondlo. Both of these clinics focus on HIV related health services and education for the surrounding communities.

The SA Zionist Federation which represents the overwhelming majority of South African Jewry implores the ANC to take note of the call of the Zulu King, who represents a major constituency of the ANC.

Notably, Nkosi Bishop Phakama Shembe, a key leader of the Shembe Church, and representing another major component of the Zulu nation, recently echoed these sentiments when he stated “For South Africa to prosper, we firmly believe that it must stand in support of Israel, not against it…Today, unfortunately, there are other voices within our society that are demanding the opposite…The Shembe Church, no less than right-thinking people around the world, whole heartedly supports the initiatives aimed at achieving peace between Israel and its neighbours…Our duty as South Africans is not to choose the path of boycott and disengagement, but to assist in whatever way we can…” .

It is clear that a very substantial number of ANC supporters, and by extension South African citizens, appreciate the importance that the relationship between South Africa and Israel holds.

It is this relationship that South Africa should aspire to build upon, for the betterment of the people of South Africa. As His Majesty noted, the ANC should not take a radical position on a conflict, but should rather seek to open channels of dialogue and discussion with the aim of ensuring a positive and constructive outcome to the conflict in the Middle East.

For the full speech by King Goodwill Zwelithini: https://youtu.be/H1UxeHRvRQ4 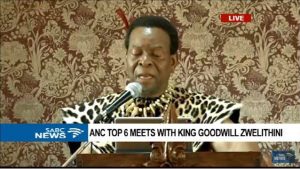