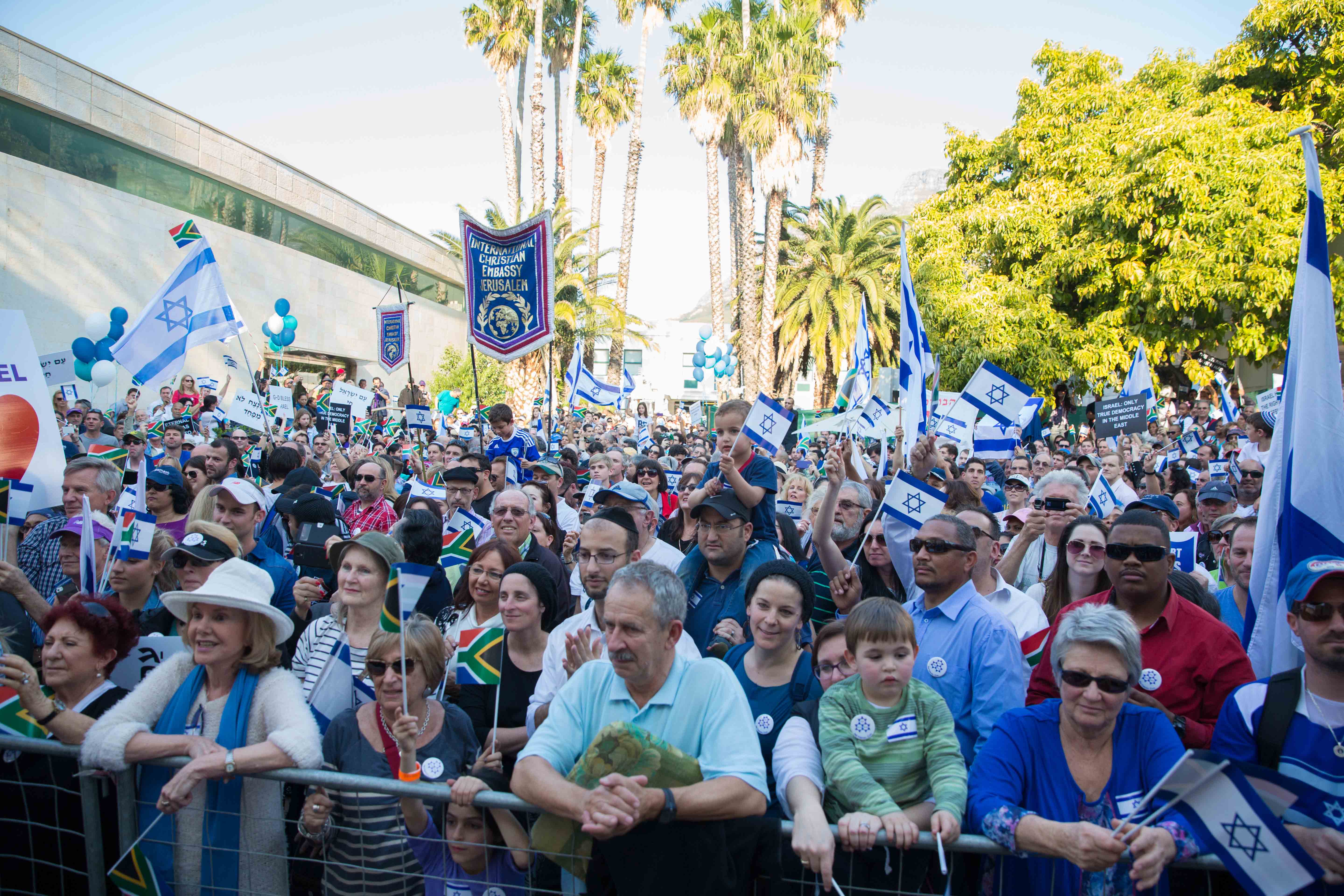 A passionate crowd of over 5000 South Africans of all races and religions came together on Sunday, 10 August, in the Piazza of the Great Synagogue in Cape Town. The inside of the Gardens Shul was almost full and the piazza was bursting at the seams. There were hundreds more that were not even able to gain access to the premises, but danced and celebrated in the streets.

Speakers at the event included; Chief Rabbi of South Africa – Rabbi Warren Goldstein, Chief Rabbi of the Common Wealth – Rabbi Ephraim Mirvis, National Chairman of the South African Zionist Federation – Avrom Krengel, and a number of Christian leaders, such as Luba Mayekiso of the African Christian Coalition and International Christian Embassy of Jerusalem, Chris Eden from Bridges for Peace and Reverend Barry Isaacs of Transformation Africa.

Cape Town Jews have been a community under siege recently, due to several very large pro-Palestinian rallies that have taken place on a weekly basis over the past month. One of these rallies occurred this past Saturday and was attended by about 40 000 people. Organisers of the event claim that this was one of the largest rallies the City of Cape Town had ever seen since the apartheid era. Protesters carried posters bearing slogans such as “Israeli terrorists”, “Israel is an Apartheid state” and “Stop the Israeli genocide”. They even carried homemade wooden rockets with “Haifa bound” etc All these insightful slogans definitely do not promote peace.

This uplifting and awe inspiring Israel Solidarity Rally finally gave the Cape Town Jewish community and all friends of Israel the opportunity to publicly take a stand against these libellous accusations, to assert the right of Israel to defend itself against those seeking to cause it harm and to demonstrate their support for Israel during these challenging times.

“After the hostilities broke-out in Israel, we felt like we needed to come together to show our solidarity with Israel, to let the people of South Africa know that there are many voices who haven’t been heard and to assert the right of Israel to exist in peace with its neighbours”, said Daniel Levitt – Vice Chairman of the South African Zionist Federation. Rev Barry Isaacs, in his address asked “ When the Christians were being mowed down and slaughtered where were all those human rights activists protesting for our brothers and sisters , when Boko Haarom kidnapped our children – where were the demonstrations – but no – when Israel defends herself from the onslaught of rockets, all these human rights organizations hurry to condemn it” ? This is double standards!

The theme of Israel co-existing peacefully with the Palestinians was present throughout the day and attendees left the rallying feeling inspired and once again proud of Israel after being subjected to a month long barrage of anti-Israel propaganda in the South African media. One of the highlights of the day was end of the rally when attendees joined in to sing passionate renditions of the South African together with Eagles Rising Faith Choir and the Israeli national anthems which filled the air with pure unadulterated passion.

We take this opportunity of thanking the CSO and EZRA for all their hard work and unselfish time and a special vote of thanks to the SA Police Services; Metro Police; Traffic Police; and all units of Law Enforcement for allowing us our democratic right to be protected while showing solidarity in a non-confrontational environment.