This weeks news revealed that South Africa is boycotting the Africa – Israel Summit in Lome, Togo because of Israel’s participation. The ANC issued a statement that the boycott is in support of the Palestinians and South Africa will attempt to persuade other African countries to cancel Israel’s involvement. This attempt at blackmail has met with no success.

This takes place against the background of the recent devastating mudslides and floods in Sierra Leone that claimed at least 300 lives, and left more than 3,000 people homeless. As so often happens Israel was the first nation to provide tangible assistance to a country beset by disaster,

This policy of assistance to people in need stresses the importance of delivering the aid quickly, in order to calm the fears of and to reassure desperate citizens that help is on its way. The two most important aspects of any aid were immediacy and relevancy: to get the aid in as soon as possible, and to make sure that what is sent, is actually what is needed.

Within 24 hours Israel delivered a three-day supply of 20,000 portions of staples like beans and couscous in the capital of Freetown to distribute to those left homeless. Sierra Leone’s president, Ernest Bai Koroma, issued a general appeal to the world for assistance, and Israel was the first country to actually deliver something tangible. President Koroma, who visited Jerusalem in January, had no qualms in accepting the help offered because he understands the value that Israel can offer to his impoverished people now and in the future.

Sierra Leone is one of the 15 countries that make up the Economic Community of West African States, an organisation that – for the first time in its history – invited a non-African head of government, Prime Minister Benjamin Netanyahu, to address it in June at its summit meeting in Liberia.

Following the food deliveries, the next stage of Israel’s assistance will be to provide antibiotics to deal with concerns about an outbreak of cholera.

What is disturbing is that South Africa puts more store on “fake news” describing the plight of Palestinians than on a small country’s ability and willingness to help those in need on our own continent. 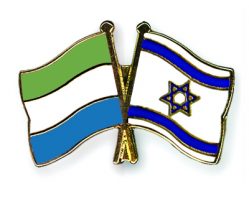