You Are Here: Home → Israel comes to standstill as sirens mark Remembrance Day 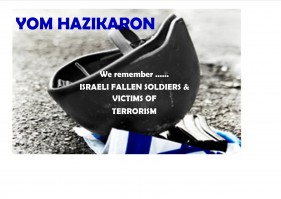 Israel paid tribute its fallen soldiers Wednesday on Remembrance Day at Jerusalem’s Mt. Herzel military cemetery in a state ceremony that commenced after a commemorative two-minute siren sounded throughout the country.

Traffic and pedestrians came to a standstill during the siren at 11 a.m. to pay respect to Israel’s 23,320 soldiers and civilian victims of war and terrorism.

Thousands of civilians, IDF soldiers and Israeli officials were set to attend the somber event commemorating those fallen since Israel’s independence 67 years ago.

Netanayahu, along with IDF Chief of Staff Lt.-Gen Gadi Eizenkot and President Reuven Rivlin, will also attend a ceremony at Mt. Herzl Wednesday at 1 p.m. to honor Israel’s victims of terror.