You Are Here: Home → Polish fashion makes being Jewish fashionable

Antonina Samecka’s grandmother told her to remove her Star of David pendant when she came home to Warsaw from an Israel trip. She didn’t. Now she plasters them all over her trendy RISK OY designs.

In Poland, it used to be that you didn’t wear your Jewish identity on your sleeve. But things have changed. Today, thanks to Jewish sartorial entrepreneur Antonina Samecka, the country’s most fashion forward citizens — Jews and non-Jews alike — are wearing Hebrew words and Jewish symbols not only on their sleeves, but also on their fronts, backs and heads.

Samecka and her business and creative partner Klara Kowtun (who is not Jewish) are the owners of RISK Made in Warsaw, a fast-growing fashion brand with a unique concept. RISK’s designs, all made of grey sweatshirt fleece material, may be inspired by hoodies worn to the gym, but the company’s tailored garments (blazers, dresses, coats, and most surprisingly, ball gowns and tuxedos) are stylish enough to wear either to work or out for an evening.

“We combine flattering tailoring with comfortable fabric, and we design for regular people with different body types,” Samecka, 30, tells The Times of Israel. “We’ve created new classics that don’t make you feel overdressed. You look better when you are comfortable.”

RISK manufactures all its products in Poland and has a number of different lines: men, women, children, maternity and pets. There’s also one called RISK OY that creatively incorporates Jewish and Israeli symbols, like the Star of David and the Hamsa, as well as words like “Oy,” “Chutzpah,” “Shalom” and “Israel.”

RISK plays with the Jewish lingo, using cute and edgy phrases such as, “Oy oy my boy is goy,” and “You had me at Shalom.” This new casual line was just launched this week with an crowd funding campaign.

“What we really want to do is to re-brand Jewish identity,” Samecka explains. “We want to show the modern, positive aspects of it. What we are doing is showing that being Jewish is cool and sexy.”

The symbolism is subtle, notes American Joint Distribution Committee (JDC) Poland director Karina Sokolowska in a conversation with The Times of Israel. “They’re Jewish, but not so Jewish. You need to know what you are seeing,” she says of the designs. 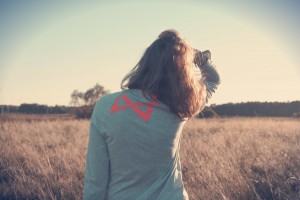 “In general, Jews in Poland are looking for ways to express being Jewish, so this is one way to express their Jewish identity,” says Sokolowska, who owns and wears more than a few RISK garments.

It’s not only members of Poland’s Jewish community (estimates of its size range between 10,000 and 25,000) who are scooping up the RISK OY designs. “They’re an attractive item for Poland’s many philo-Semites,” Sokolowska notes. “I see a lot of people walking around wearing these clothes.”

Tomasz Kaplinski, a 40-year-old non-Jewish lawyer living in Warsaw, is a RISK OY fan. “I love RISK clothes because of the color and shape. I also love them because of the collections with Jewish motifs,” he says. He adds that the clothes are relatively expensive, but he feels privileged to wear them.

Kaplinski has bought the men’s RISK OY collection and wears the clothes to parties in Warsaw. He has also worn other clothing with Jewish or Israeli symbols while at the seaside, and he reports that he has never encountered any problems.

“There was no negative reaction whatsoever,” he says. “I know that wearing that kind of clothing starts and invigorates some discussions about Jews, Israel, Polish Jews, our relations and our common history. Wearing it is like taking part in a public discussion about Jews in Poland — that Jews live here and that Jews can live here.”

The RISK OY collection accounts for only about five percent of RISK Made in Warsaw’s business, but Samecka, calling it a “labor of love,” is committed to the line. 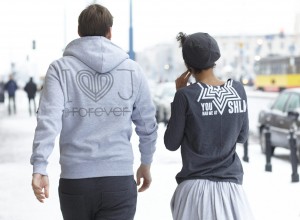 RISK OY is actually a recent re-branding of RISK for JOINT, which were designs Samecka came up with in 2012 when she and Kowtun were invited by Sokolowska to participate in a major Jewish community event called “Seven at Night,” which took place around Shavuot at seven different synagogues in the old Jewish neighborhood of Krakow.

Samecka and Kowtun were just starting their company then, and Samecka’s relationship with JDC has grown since that first partnership.

“The Joint has been very supportive of me,” she says. She participates in JDC programs for young European Jewish leaders and credits the organization with providing her with a lot of valuable entrepreneurial education.

Sokolowska has noticed that Samecka, who grew up with a culturally Jewish mother and atheist non-Jewish father, has strengthened her Jewish identity and her relationship with the Jewish community since first becoming involved with the JDC and launching the RISK OY line.

Samecka, who is the company’s CEO (she and Kowtun both design the clothes, and Kowtun is responsible for product development), has had a steep learning curve. However, she did know what she was getting in to. Before starting up RISK, she had almost a decade of experience in fashion publishing under her belt, working at women’s magazines as a fashion and beauty writer. At one point, she was an executive editor at InStyle magazine.

“When you work in fashion, you have to look chic. You have to wear high heels and designer clothes,” notes Samecka, who, with her long dark hair, blue eyes and chiseled cheekbones, looks like a fashion model herself. (She and the equally attractive Kowtun pose for some of RISK’s photo shoots.)

“I would dream about coming home at the end of the day and putting on sweats,” she shares about her days in fashion publishing. When she realized she has 11 gray hoodies in her closet, she began having thoughts that eventually led to the RISK concept and the launching of the company.

Samecka has thrown herself into RISK and loves being a creative businesswoman. “I’m a workaholic and my biggest challenge is to learn to relax,” she admits.

The company has grown rapidly and its clothing is currently sold by e-commerce and in brick-and-mortar multi-brand stores in countries around the world, including Germany, Italy, France, the US and Saudi Arabia. RISK does not yet have an on-the-ground presence in Israel, but Samecka, who has visited Israel three times, would love to branch out to Tel Aviv.

The young women are investing in cutting-edge advertising modalities, including interactive videos. Their boutique on Szpitalna Street in Warsaw is a sight to behold, with its highly imaginative upside-down design (furniture hangs from the ceiling, causing customers to wonder if they are standing on the floor or ceiling). The company also has a mobile pop-up store inspired by a classic Polish trailer and echoing many of the design elements of the Warsaw shop.

A decade ago, when she came home from a Taglit-Birthright Israel trip wearing a Star of David around her neck, her Holocaust survivor grandmother, who had always warned against being “too Jewish” outside the house, told her to remove it.

“She said, ‘Take it off! It’s too dangerous!’ ” Samecka recalls.

“But I knew I had to have the courage to wear it, to de-stigmatize being Jewish. That’s the idea behind the RISK OY collection.”