You Are Here: Home → We support the Marches of the 3 million French

We support the Marches of the 3 million French 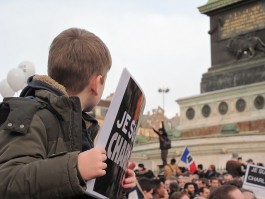 The South African Zionist Federation (SAZF) Cape Council, wishes to convey its support for the marches by 3 million French people to identify with the core values of the Republic, of Equality, Fraternity and Liberty.

Of particular poignancy was the slogan ‘Je suis Juif” which identified the French public and its leadership, with the plight of the Jews in France. The French Premier’s words that ‘France without Jews would be a failure’ are a clarion call to defend its secular way of life and its freedom of expression.

After a string of attacks on Jews and Jewish targets by Islamic radicals, French Jews have increasingly sought refuge in Israel. The Zionist dream of providing a safe haven for Jews, is of as much relevance today as it was immediately after the Holocaust.

Not since the Second World War, has the position of Jews been more precarious in many parts of mainland Europe. At this time of crisis for Jewish communities under onslaught, we remember the slaughter of 6 million Jews on the same soil drenched with their blood. We remember too, that like the Islamic radicals of today that the Nazis were initially a radical minority of the German people, but that they spread such fear into the hearts of the German people that they lost all sense of humanity and descended into barbarity.

We call upon all moderate Muslims and all people who cherish the ideals of the French Republic, to fight the barbarity of Radical Islam, which views non-Muslims as ‘infidels’ entitled to be killed.

We call upon the South African government to do more to fight against the horrors that radical Islam wreak on our continent, in the form of Boko Haraam and Al Shabab, and other groups.

We as Africans, need to show the same care about our African brothers in Nigeria, Somalia, Darfur, Sudan, Central African Republic and Kenya, whose lives have been shattered and cut short by Islamic radicals. We need to march in step with the French people and declare that we too stand for Equality, Liberty and Fraternity!