You Are Here: Home → SAZF (Cape Council) statement condemning the slaughter of Palestinians in the Yarmouk refugee camp 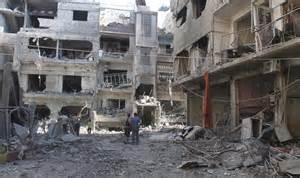 We are saddened to witness the brutal slaughter of over one thousand Palestinian residents of the Yarmouk Refugee Camp, near Damascus, by an alliance of Islamic State and the Jihadist Al-Nusra Front. This camp which at one time housed over 100,000 descendants of refugees, has during the past 5 years of the Syrian Civil War, been whittled down to only 18,000 souls, as most of its residents have fled. Many of those killed recently are from the weakest segments of society, women, the infirm, but also include religious leaders, who do not subscribe to the extremist versions postulated by the Islamic State.

We are appalled at the gratuitous destruction of property, particularly the ‘cleansing’ of historic monuments and of places of worship.

We also censure the silence of all those, particularly the media, who are always quick to condemn Israel whenever it is forced to defend itself, for perpetrating alleged human rights violations,whenever Palestinians loose their lives as a result. The Syrian people and hundreds of thousands of Palestinians that have been living in Syria, have suffered unbelievable brutality at the hands of their co-religionists, with scarcely a murmur in the media.  This double standard, where Israel alone, is always held to a higher standard than any other people needs to be exposed for the blatant anti-Semitism that it is.

The SAZF, Cape Council, also wishes to condemn the perpetuation of the refugee status of the Palestinian people that are still, five generations after becoming refugees, being kept in ‘Apartheid like’ refugee camps, cut off from being able to participate in the economies of the countries in which they find themselves. We call on all the countries housing Palestinian refugees, to close these Apartheid relics, and to absorb these Palestinians into their societies, and to grant to them all the rights that are afforded to their citizens.