You Are Here: Home → Response to ANC’s statement on the Gaza conflict

Response to ANC’s statement on the Gaza conflict 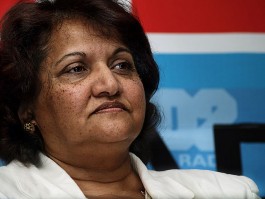 The SA Jewish Board of Deputies (SAJBD) and the SA Zionist Federation deplore and condemn in the strongest terms the statement on the current conflict in Gaza issued earlier today by ANC Deputy Secretary General Jessie Duarte. Such naked invective is something one expects to find only on the more extreme wing of the anti-Israel lobby; coming from our country’s ruling party, it is nothing short of disgraceful.

In the weeks leading up to the present unrest, not one word of condemnation has emanated from the ANC concerning the abduction and murder of three Israeli teenagers. Nor did the ANC see fit to condemn the escalating bombardment by Hamas of Israeli population centres that preceded the current Israeli military response and was the direct cause of it. Hundreds of deadly missiles have been and continue to be fired at Israel’s cities and towns. Not once in the statement issued in her name was Ms Duarte able to even acknowledge this fact, let alone denounce it. This is so, despite the fact that hundreds of South African citizens, including school children, currently in Israel are being continually subjected to this lethal danger. Instead, her supposed moral outrage has been directed solely at Israel’s response, notwithstanding that its purpose is to defend its people against such criminal acts of aggression.

Related to this has been the ANC’s signal failure to denounce what are objectively speaking amongst the worst current instances of human rights violations, both in the Middle East and in Africa. These include the more than 160 000 deaths in Syria and the atrocities committed against Shi’ite Muslims by the Islam State in Iraq and the on-going massacres of Christians in Nigeria. The ANC’s silence over these issues has been deafening, especially when compared with the sheer viciousness of its attacks against Israel.

The SAJBD is particularly appalled over the shameful comparisons made by Ms Duarte between Israel’s actions and the Nazi campaign of genocide against the Jewish people during World War II. Comparisons between Israel and the Nazi regime are obscene, not only because they are so grossly defamatory towards the Jewish State but because they belittle the unspeakable crimes of Nazism itself. It is self-evident that casualties resulting from a necessary and unavoidable military operation – casualties that Israel goes to considerable lengths to minimise – cannot be remotely equated with the systematic mass murder of millions solely on account of their being Jewish. We believe that Duarte is well aware of this, but has chosen to make such a comparison for the purpose of causing the maximum hurt and offense. In doing so, she has dishonoured the standing of the party of Oliver Tambo and Nelson Mandela, – a party that has consistently fought against racism and bigotry – as well as grossly insulting world Jewry and the memory of all the victims of Nazi tyranny.

It is unacceptable in any decent, democratic society for a responsible political organisation to propagate such venom and bigotry, let alone a party that has been entrusted with the reins of government. In light of this, the SAJBD demands that the ANC distance itself from the repugnant comments made in its name by its Deputy Secretary General and to issue an unequivocal apology to the Jewish community.