You Are Here: Home → The man who captured Israel – on film (Cape Times)

The man who captured Israel – on film (Cape Times) 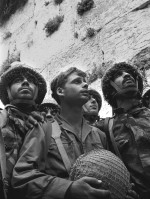 WITH his trusty Leica round his neck, David Rubinger could pass for a tourist.But he`s not a tourist – he wears his camera with him because it is part of who he is. In fact, his camera is what sets him apart from many other people.

Rubinger, 91, is an internationally acclaimed photographer who covered the Middle East for Time magazine for 50 years.He is retired now, but he often travels to where his work is being exhibited.He covered all the Israeli wars, and he says he is lucky to have had a career that coincided with the birth of the state of Israel.He has covered the Israeli story from the beginning and says the wars in the Middle East is a tragedy, no matter who is right or wrong.Rubinger is in Cape Town for the opening of an exhibition titled Eyewitness to History: 60 years of Israeli photojournalism at the South African Jewish Museum in the CBD, which opens on Sunday.Some of his most iconic work will be on display, including a photograph of three Israeli paratroopers shortly after the recapture of the Western Wall in the Six-Day War.While the image became an iconic photograph, Rubinger has his doubts about whether or not it should have become iconic.He points out composition faults in the picture, but as he says, it is not the photographer who decides on what becomes iconic, it is the people.To describe Rubinger as sprightly would be an insult, even though he turns 91 this year and walks with the aid of a cane, he is undeniably charming and engaging, and his mind is razor-sharp.He delves into the past, picking out memories of his careers, of images that are important to him.There`s an intimate one of Egyptian president Anwar Sadat and Israeli primeminister Menachem Begin, before they signed a peace treaty in 1980.

For Rubinger, it is an image of hope.”Here were two leaders whose countries went to war three times, there werethousands of deaths, and here they were whispering and being friendly It was a sign of hope that the world is not lost.”One of his most poignant shots is that of a little Palestinian girl standing on the rubble of what had been her familyhome. The house had been bombed because her uncle had hidden arms in the house.”I looked at the little child and thought that grown-ups make war and the children pay the price,” says Rubinger.He is proud that the imageforms part of the exhibition.On Sunday night he will take guests through his career, doing a Powerpoint presentation to highlight images that not only define the Middle East, but also that are special to him.Each picture has an anecdote, a background to the picture, to give viewers a glimpse into what goes into making a good picture, why it is important and what message it is meant to convey Some of the images are sad,he says, but there are also ones that are funny.There is one of actor Burt Lancaster, who he was commissioned to take photos of on the set of a movie.Rubinger says Lancaster was difficult to work with, and**I looked and thought: grownups make war and children pay the pricethat Lancaster eventually swore at him and ordered him off the set.After calming down, Rubinger wrote him a letter peppered with expletives, but the bottom line, Rubinger said, was to make Lancaster understand that not only was this Rubinger`s work, but also the people who had asked him to take the photos were the very people who were paying the actor.Lancaster apologised and Rubinger went back on set to finish his project.Rubinger has lived in Jerusalem for most of his life, but also lived in Palestine after fleeing Austria when Nazi Germany annexed Austria.

He served in the Jewish Brigade of the British Army during World War II.It was during leave in Paris that a gift from a French girlfriend would change his life.She gave him a camera, and he was soon shooting.He was in Germany after the war, where he bought his first Leica. “I paid 200 cigarettes and 1kg of coffee for the Leica – that was the going rate for a Leica,” he says with a laugh.He was a stringer for Time magazine, became a permanent freelancer and was made a permanent member of staff in 1970.

His wife Anni, who died in 2000, worked alongside him as a picture researcher. “We were the only couple to work at Time,” he says.The exhibition will run from May 18 to the end of July.DAVID RUBINGER BRINGS 60 YEARS OF PHOTOJOURNALISM TO CITYThe man who captured Israel – on filmPOLITICS: Menachem Begin and Anwar Sadat reaching their historic peace agreement in 1979.

A LIFETIME OF PHOTOGRAPHY: Internationally acclaimed photographer David Rubinger is in Cape Town to open his exhibition at the South African Jewish Musuem.